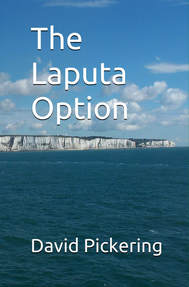 ​An embattled prime minister is handed the solution to all her country's problems. A picaresque novella that some might say has more than a little relevance to recent events in the political world today... 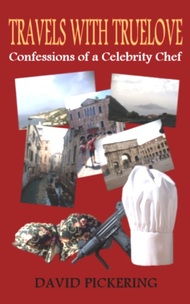 ​​TRAVELS WITH TRUELOVE: Confessions of a Celebrity Chef

​At last, the book they said should never be written and could never be published. The book that no agent would touch and that publishers everywhere sent straight back to the kitchen.  The controversial celebrity chef loved and loathed by millions finally lifts the lid on the bouillabaisse of his life and the extraordinary things that happened to him after his sensational bust-up with the big TV bosses. As usual, he’s all over the plaice à la meunière like a mad woman’s crème anglaise and, be warned, he’s not above spilling the caramelized cannellini beans from time to time about his fellow-celebs… 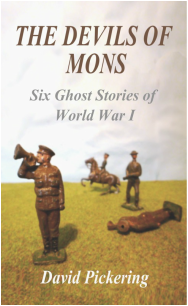 ​THE DEVILS OF MONS
Six chilling and original stories inspired by the realities of life and death on the Western Front and beyond, building to a poignant and revelatory climax:

The Devils of Mons A troop of British lancers eagerly await their first action in 1914.
Gaston Grillot’s Ghost A dimwitted French gunner confronts life after death when he becomes a casualty of the Battle of the Marne in 1914.
Achilles at Gallipoli At Gallipoli in 1915 two Anzac officers have an eerie experience that defies rational explanation.
The Clay-kickers’ Apprentice The war underground takes on a new horror at the Somme in 1916.
The Tank A supernatural terror confounds the German crew of a captured British tank in 1917.
The Thing with No Eyes Two schoolboys hear about an unearthly threat in no man’s land in the last months of the war.

“A great collection of short stories about ghosts seen and heard during the world war. Some are heart-breaking and some are inspirational. I thoroughly recommend this book to all.” – S.U.

​“Very well written, very slick and easy to read … there was a real poignancy and realism to the final words that will stay with me a long time.” – B.R. (The Thing with No Eyes)
​ 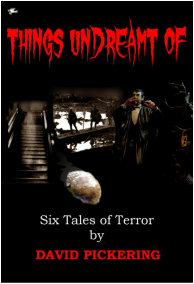 THINGS UNDREAMT OF
Six original horror stories to chill the blood and delight the soul, available in both paperback and ebook form.
​The Ghost at the Foot of the Stairs was longlisted in The Guardian's Short Story Competition 2016, judged by Stephen King.
​
​The Ghost at the Foot of the Stairs A man finds himself terrified of going upstairs...
The Thing with No Eyes Two schoolboys learn about an unexpected horror of the battlefields of World War I.
The Stranger in Room Six Disturbing events take place after a stranger checks into a lonely hotel.
Something in the Garden An old lady daren't go into her own garden because of what she fears is waiting for her.
The Tollkeeper A birdwatcher sees something that opens the door on a chilling tragedy that is not yet over.
Upon the Chaos Dark A couple set off on a round-the-world cruise unaware that it will prove to be their last...

“Classic British scare-writing. I was very much impressed by this collection of shorts. It put me in mind of M.R. James, Poe, Blackwood et al; i.e. creepy but without the gore.” – S.

“Classically written, elegantly edited, these six short stories left this reader wishing for more. Their high quality lifts them above genre and into the realm of recommended reading for anyone who appreciates a well told short story.” – G.F.

“One to raise the hairs on the back of your neck.” – S.K. (The Ghost at the Foot of the Stairs)

“I greatly enjoyed this simple ghost story. The style of writing is old fashioned and reminds me of Poe and Dickens. Very much enjoyed.” – A.C. (The Ghost at the Foot of the Stairs)

“I really like subtle scary that builds up over a seemingly non-scary story. This had the feel of ... maybe Poe? or Lovecraft? … I truly enjoyed this story – the language, the plot, the length, and the ending.” – T.L. (The Ghost at the Foot of the Stairs)

“It is a true rarity these days to find a story that actually creeps me out while reading it. That was why this short story left such a lasting impression on me.” – J.A.D. (The Ghost at the Foot of the Stairs) 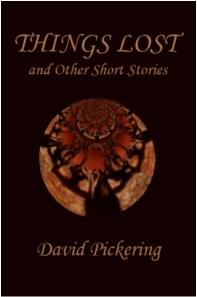 THINGS LOST
Six original short stories and a novel extract, available both as a paperback and as an ebook:
​
​Glass A young girl’s fear of glass has everyone mystified.
A Farewell Performance A failed actor and a murderous gunman on a rooftop. Will the pen defeat the sword?
The Mayor’s Tale A market town finds itself in a media storm. Mayor Hodges resolves to make the most of it…
Things Lost It was the summer when everything burned. Amid the fires, two teenagers, on the brink of their future, spend an afternoon in a countryside lost in the past.
Weighing of the Heart Four couples honeymooning on the Nile decide to visit the tomb of the Aga Khan and to witness a proof of deathless love. But will their own marriages turn out so well?
How to Eat a Seagull An old lady shares one of the secrets of a full and surprising life. Dedicated to Grannies everywhere.
And Stones Shall Dance (extract)

“Suitable for anyone who enjoys well written stories with the added benefits of humour and absorbing plots.” – G.R. 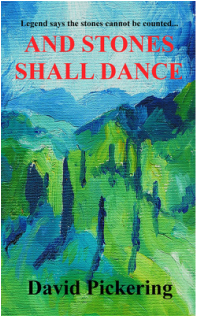 ​AND STONES SHALL DANCE

This unconventional rites-of-passage debut novel begins on the last evening of the twentieth century and spans a 25-year period in the life of its central character, encompassing along the way life in a public school, a mysterious stone circle, witchcraft, illegal archaeology, first sex, teen confusion, hedgehogs and sudden death.  Adventurous in subject matter, form and language, it has topped charts on sites for new writing and is available both as a paperback and ebook.

“This reader held spellbound!! ‘And Stones Shall Dance’ by David Pickering turned out to be one of those surprise novels I know is going to stick with me for many years to come … I decided to give it a look off the recommendations of a few friends and I’m very happy that I did.” – D.H.

“I will have to put this book on my list of stories I couldn’t put down. I loved the writing style and unique format of cleverly weaving past and present into one culminating conclusion. It was fast paced and drew me in emotionally … an excellently written story that I would recommend. I really couldn’t put this book down, it was mesmerizing.” – L.

“Thoughtful, considered and mature … a book to savour!” – C.E.

“A well told tale of the trials of first love and of how it can live on in the soul long after the attitude and acne of teenage tribulations have gone. This is for the well seasoned reader who enjoys locking horns with a well crafted and carefully constructed story.” – F.L.R.

​
Click here to go to the author's page on Amazon.co.uk

Click here to go to the author's page on Amazon.com